UP- Oral cancer capital of India 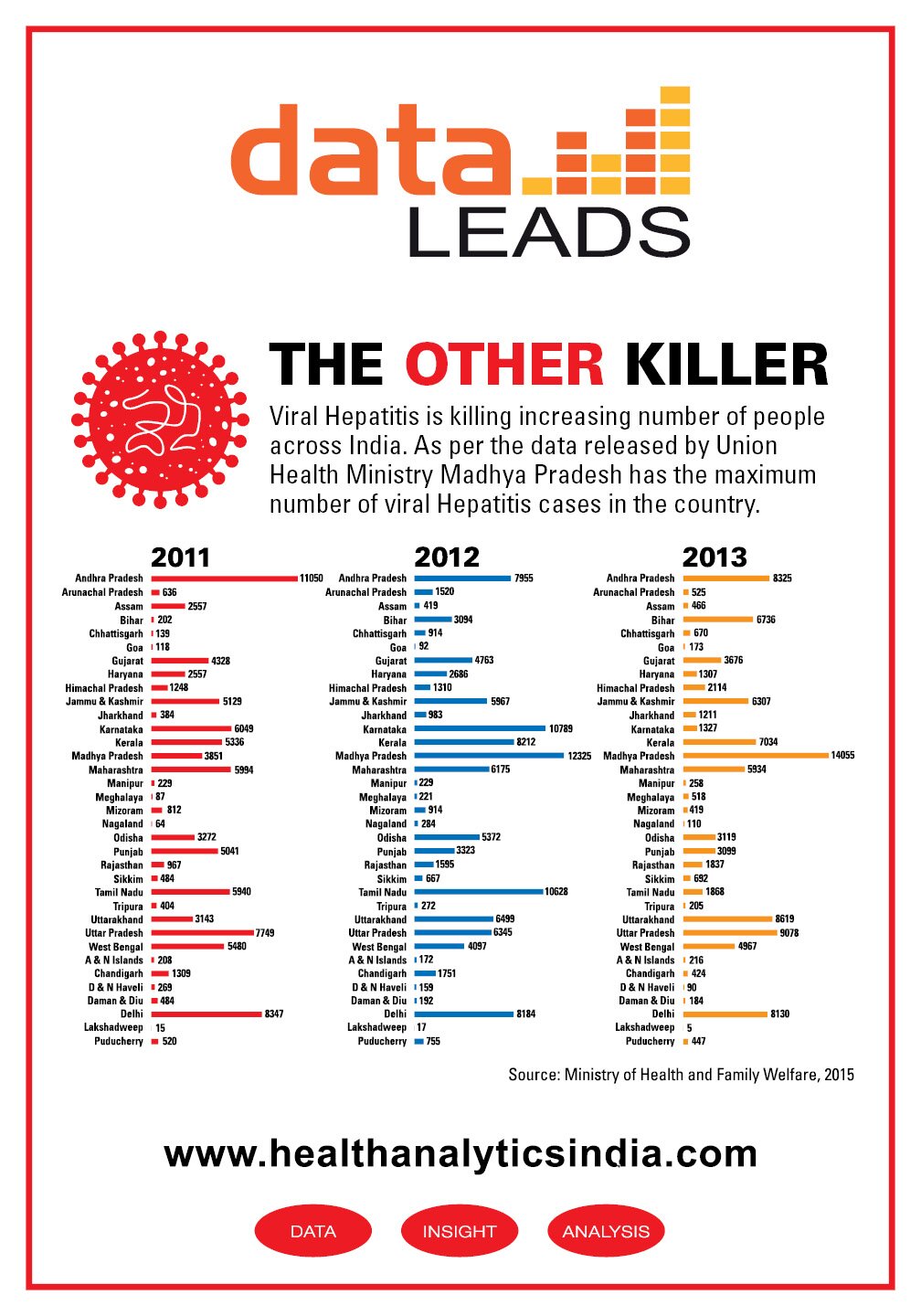 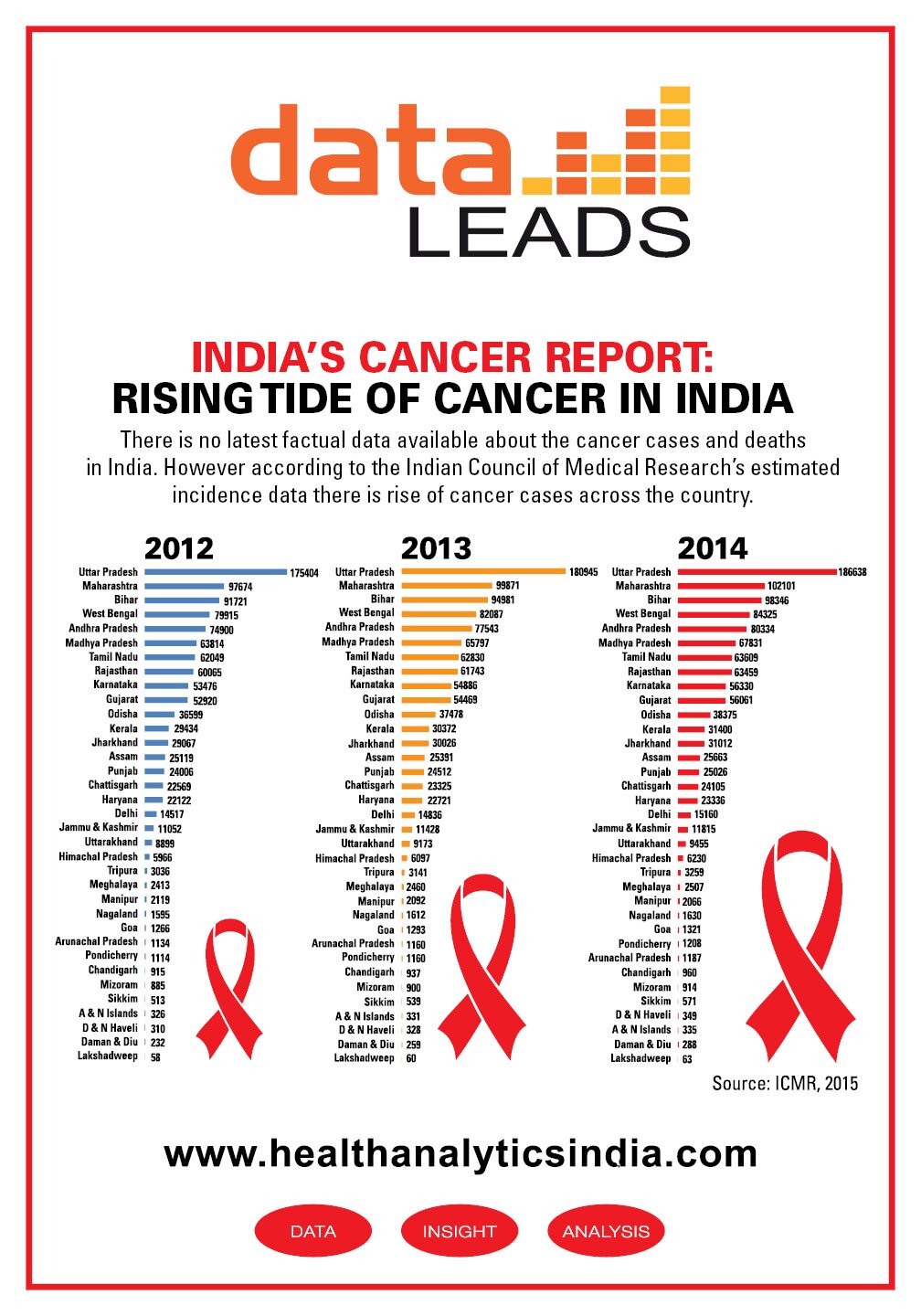 Cancer cases on the rise

Cancer cases are rising at a rapid rate in India. Globally, the prevalence of cancer is increasing, and it is known to be the leading cause of death around the world. 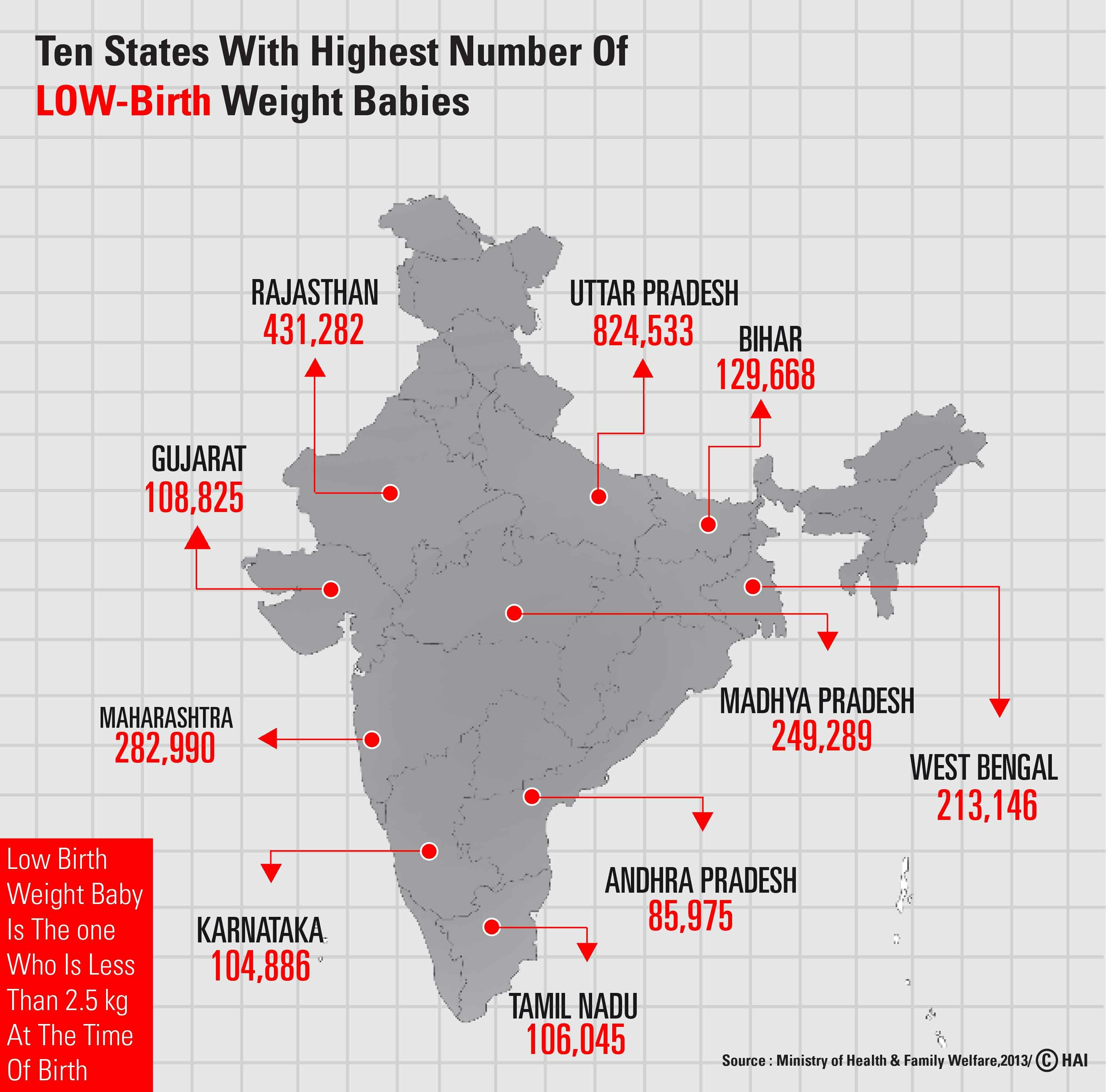 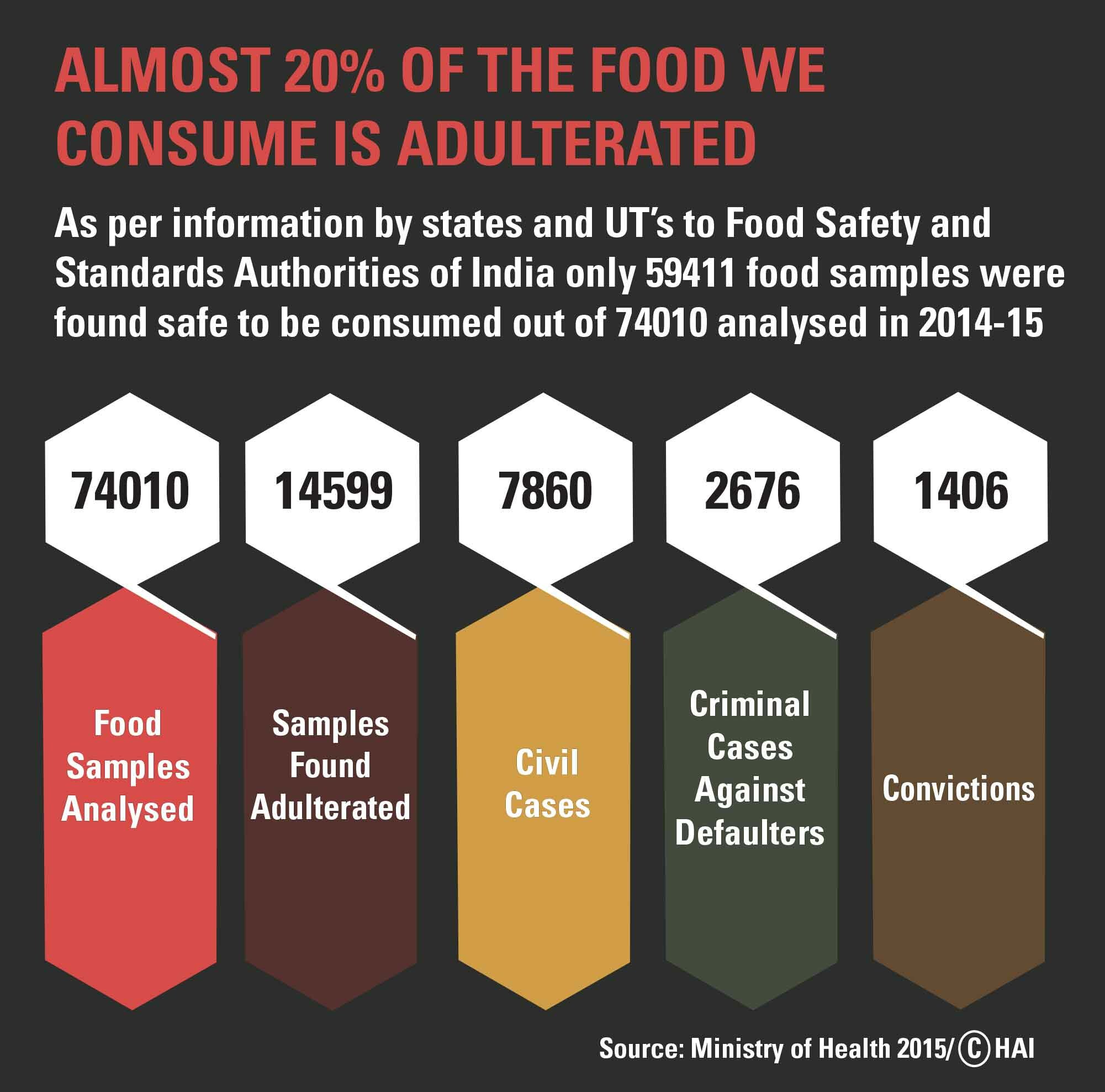 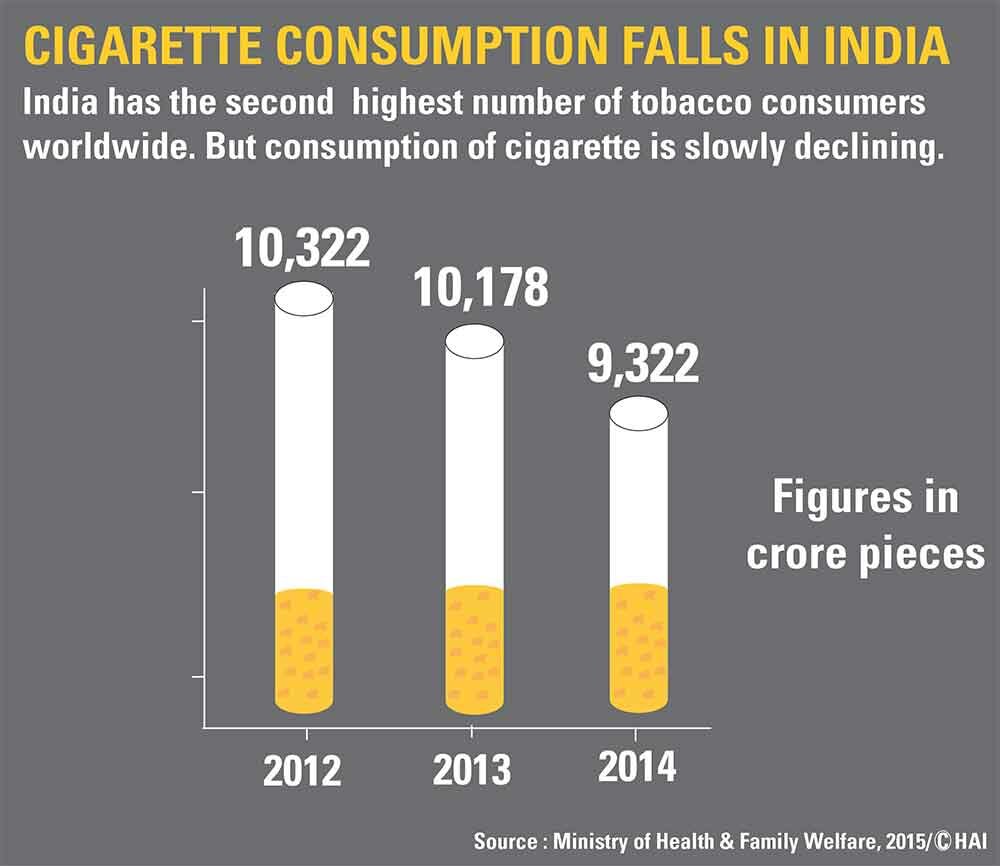 Cigarette consumption is falling in India with only 9322 crore cigarette sticks consumed in 2014 which is 10 crore less than 2013. 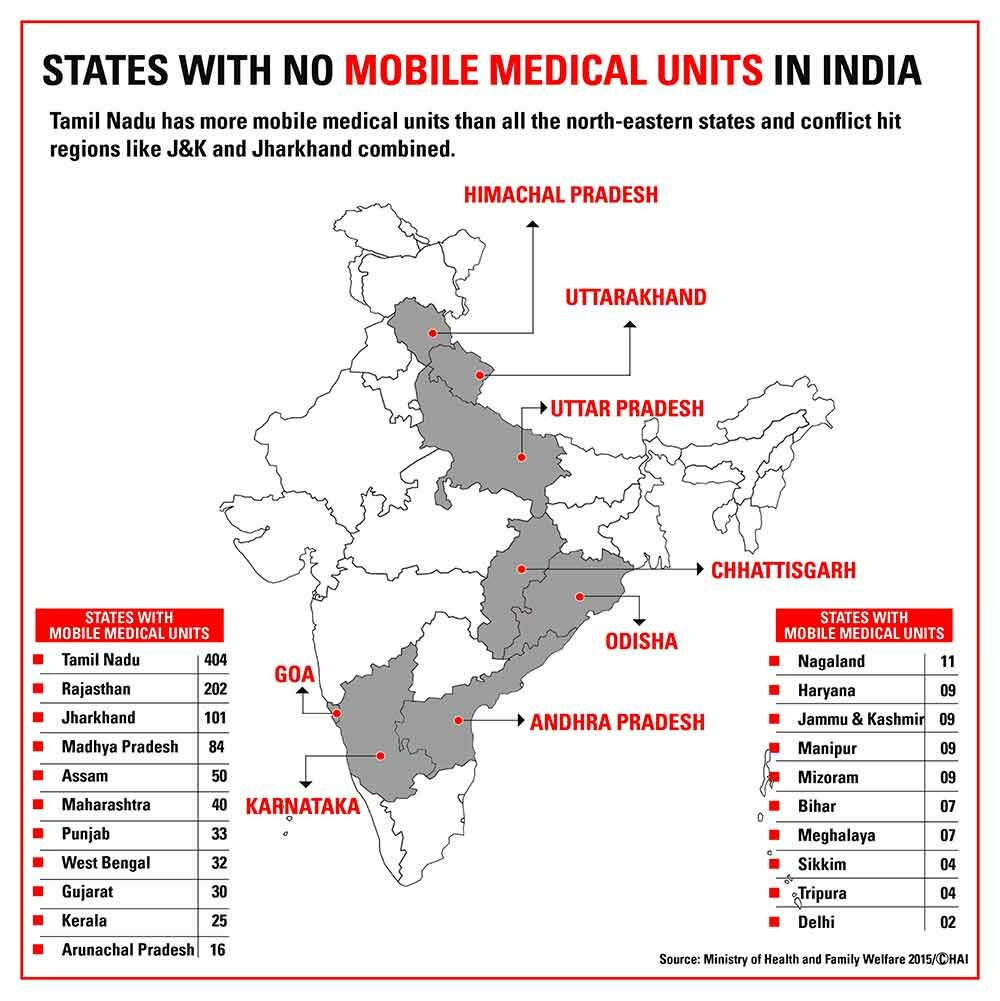 No Mobile Medical Units in 8 states

Endemic goitre is prevalent in India. The major reason behind it is iodine deficiency. Lack of iodine in human beings can cause goiter which enlarges thyroid gland.

India’s doctor population is much lower than the WHO prescribed limit of 1:1000, still India has a million doctors registered which implies that the growing burden of population makes the ratio worst

An eye transplant known as keratoplasty is a blind patient's best bet to regain vision.  But, experts say that the biggest limiting cause is the scarcity of donated corneas.

Kala azar is a tropical disease and one of India’s poorest states Bihar is the epicentre of kala azar in the country, where 33 out of 38 districts are affected accounting 70 per cent of the total population.

India and Pakistan rank low on major health indicators like maternal mortality and infant mortality, though Bangladesh and Nepal are not far behind.

Currently 20% of India's population is covered under health insurance, rest pay out of pockets.

As per ICMR data, India records 11 lakh new cancer cases and five lakh cancer deaths every year. Most of the deaths occur due to dearth of doctors, poor treatment and lack of diagnostic devices.

No testing labs for H1N1 in India

India is facing an acute shortage of blood. According to WHO India witnessed greatest increase in the number of voluntary unpaid blood donations from 3.6 million in 2007 to 4.6 million in 2008 as per the latest available data, India being ranked as the top ten countries in global blood collection.  But still, the availability is short of requirement.

Almost 80% of patients visit a private practitioner. However, most health-related data in India is obtained from public hospitals and public health-care service units.

Nine Lakh people affected with leprosy in 10 years in India

The Global status report on road safety 2013 estimates that more than 231, 000 people are killed in road accidents in India every year on an average and 130 037 deaths in the year 2013. Almost half of all deaths on Indian roads are among motorcyclists, pedestrians and cyclists.

The burden of hospital-acquired infections (HAI) remains unknown because there is no national system in India for collecting data on the infections.

Indians are living longer, but healthy life expectancy has increased slowly and a complex mix of fatal and non-fatal ailments cause a tremendous amount of health loss, according to a new analysis of 306 diseases and injuries in 188 countries.

How Safe Are Clinical Trials?

India is a popular destination for clinical trials as there is a pool of easily available volunteers and the cost of trials is cheaper.

Globally, 15.6% of total government expenditure was dedicated to health, according to WHO report 2013.

13 of the 20 World’s Most Polluted Cities in India

Air pollution killed 3.7 million people in 2012 and according to WHO it is one of the major environmental health concerns.

Why Do Students Kill Themselves?

In past three years 401910 people including 23145 students committed suicide in India.

Number of missing women has steadily risen from 61 million to 126 million between 1970 and 2010. This increase is faster than that of the world population, with China and India accounting for most of the deficit in women.

Cancer has killed 8.2 million people worldwide in a year

The WHO report says that treating cancer alone will not solve the crisis, and that governments need to implement early prevention strategies in order to combat the disease.

India produces 4 Lakh kg of medical waste every year, and this figure is growing every year, according to data from the Union Health Ministry

Among younth, India has the world’s highest suicide rate

Mental health kills 760 people every day in India and the country accounted for more than 258,000 of the 800,400 suicide deaths worldwide, according to the latest available WHO data. That’s more than in any other country.

Drug monitoring centres help improve patient safety and cut down the risks of adverse medicines on health. But there are only 150 Adverse Drug Reaction (ADR) Monitoring Centres across the country which collects data about the different drug reaction cases.

AP tops list with most number of AIDS patients

India has the third-highest number of people living with HIV in the world with 2.1 million affected people. While HIV-related deaths have come down by 30% since 2007, thousands of people still die every year from the disease.

The government in the centre this year approved 100 smart city projects, based on an initative proposed by Prime Minister Narendra Modi. According to news reports, 'Thesmart city vision' was announced last year by the current government.

Only 148 labs to test food in India

The recent data made available paints a dismal picture for the food testing in India. There is almost no food testing done as the country has only 148 food-testing laboratories available for ensuring quality of food.

UP tops list with most number of new leprosy cases

Leprosy has officially been eliminated in India in 2005, yet 130,000 new cases are diagnosed every year – more than every other country put together. And Uttar Pradesh has the highest number of new cases of leprosy in the country.

India has only 10,235 licensed x-ray equipment with Maharashtra topping the list having 1,584 machines. While as Tamil Nadu stands at second with 1239 and Kerala third with 1085 x-ray machines.

According to data published by WHO, 258,000 people committed suicide in 2012, making India country with most number of suicides in the world. However National Crime Record Bureau figures give a different view.

The data made available by the ministry of health and family welfare revealed that only 198 requests for clinical trials were approved against 230 application for drug testing in 2014.

Recent data made available by Ministry of Health and family Welfare revealed that a large number of medical equipment available in India is lying dysfunctional.